Things I Will Miss About Botswana : The Kids 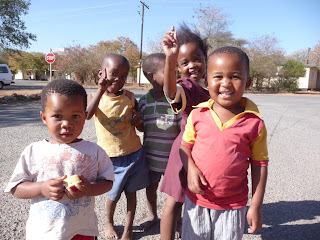 This is a new series I will be running from now until the time I leave Botswana.

There are a lot of little kids in the "neighborhood" around my house. Most of them are too young to go to school so I see them playing in the streets any time I walk by. There are two brothers (far right and far left in the picture above) who I taught how to give me a "high five." They speak no English except now they run and yell, "High Five!" endlessly whenever I walk by. They then taught every other little kid in the area how to say it and so I get bombarded from all sides when I walk down the street.

I have tried to teach them my name, even my Setswana name, but they have never used it. Instead, they have taken to calling me "Lekgoa la me" which translates into "my white person" or "my foreigner." I find it very funny to be followed down the street by a bunch of kids running, waving their arms wildly, and yelling, "My white person!" over and over again. Its not like I wouldn't stick out otherwise.

I recently taught them how to give a "high ten" and a "low ten." Now mixed in with the constant cries of "high five" are "Dira Ten!" which is a mixture of Setswana and English for "Do 10!" I can be having the worse day ever, but those kids will immediately bring a smile to my face and they have this amazing ability to make my day better.

When I was going through the recruitment process, my recruiter told me that volunteers who served in Africa sometimes had problems with being a minor celebrity, especially when they had to adjust back to life in the US. I don't know if I quite feel like a celebrity but I do know that I will miss having these little kids drop everything and come running over just to give me a high five.

Email ThisBlogThis!Share to TwitterShare to FacebookShare to Pinterest
Labels: Botswana, Peace Corps, Things I Will Miss 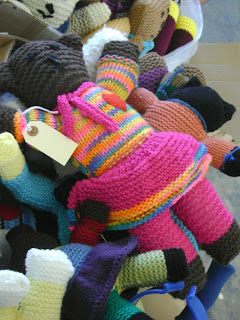 This is one of my new favorite stories from my time here:

The other week, I went to the post office to pick up more boxes from Mother Bear Project. When the bears are shipped they come in several large boxes, each containing 50 bears. This presents a small problem for me. First, the postal workers don't like to lift the large boxes, so I have to walk around to the side door and carry the boxes out myself. I grabbed them one by one and then placed them on the curb outside.

The next problem is finding transportation because I obviously cannot carry all four boxes at once. I stood at the curb and tried to flag down a taxi to get me home. That morning, I had gone to the post office early to avoid being stuck in line. I did manage to avoid the lines, but not the morning commute. Every taxi that passed by was full of people. I stood there on the street for a while and tried not to get frustrated.

Then a red car passed by me and the driver immediately turned around and came to park right in front of me. He jumped out and seemed happy to see me. "Mopati!" he said, "Do you need a ride? Where are you going?"

I am pretty sure I have never seen the guy before. I smiled and pretended that I knew him because he obviously knew me. I told him I was trying to get a taxi home and he offered to give me a ride. We loaded the packages and I got in. We talked about the weather and other small talk as I tried to figure out where I knew him from. When I tried to give him directions, he laughed and told me he knew the way.

We pulled up to my house, I unloaded the boxes, and then thanked him. He told me it was great to see me and that he would see me again soon.

I still have no idea who he was but I did get a free ride home.
Posted by Daniel Holman at 12:07 PM 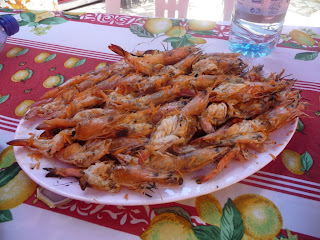 
There really is nothing too special about the Mozambican capital, Maputo. It is a very large, crowded, and incredibly dirty city. That being said, a major highlight of being there for me was the fish market. Other volunteers had told me about the market and it sounded great. There were people selling fresh seafood in the front and then several restaurants behind that. You would buy your fresh seafood and then take it to a restaurant to have them cook it.

The market is bordered by  a low, corrugated metal wall and there was a small doorway leading in. Before I could even get to the door, there were several guys around me telling me to come to their places. "I have the best! Come to my restaurant!" yelled one. Another leaned in close and whispered, "I give you best price. Best price." I waived all of them off and walked in.

There were several booths with all sorts of seafood offerings. One booth had a pile of lobsters, another had massive fish, beside it was one with massive king prawns, and then there was one with buckets full of clams. The clams were intermittently shooting small jets of water out. It was overwhelming to walk do the aisle and have everyone yelling in Portuguese and English to come buy from them.

I walked through the market several times to see what was available and settled on eating shrimp. There were several women selling shrimp and I shopped around, not really wanting to haggle too much. One of the women had king prawns (large shrimp) that were easily 6 inches long. She asked for 800 Metacis ($30) per kilogram so I walked away. Another woman had regular sized shrimp and started off by asking 400 Metacais ($15) per kilogram. After some negotiation and walking away, she lowered the price to 200 Metacais ($7.50) per kilogram, but only if I bought 2 kilograms.

Now with 2 kilograms of shrimp in a plastic bag, walked over to the restaurant side to find someone to cook them for me. Once again, I was quickly approached by several guys and they all had different prices. I found a guy that offered to grill the shrimp for 90 Metacais ($3.30) per kilogram. He laid out a tablecloth and we sat under an umbrella in an outdoor eating area and had a beer.

I started to get worried when 30 minutes and I had not seen the guy. After the run of bad luck on the trip, I began to wonder if the guy had simply taken my shrimp and walked away. We looked around the area but couldn't find him. After 15 more minutes he appeared and assured us the food was coming soon.

He came back carrying a large white platter with the shrimp laid out. They had been grilled and then coated with with butter, lemon, and garlic. It was some of the best shrimp I have ever eaten. They were so good that Tess, who is normally a little squeamish with shrimp, peeled and ate them just as fast as I did.

All figured up, I paid about $21 for 4.4 pounds of cooked shrimp and it was easily the best meal I have had in the last year.
Posted by Daniel Holman at 2:43 PM 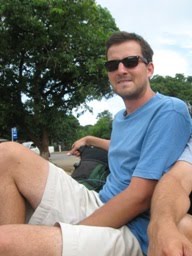